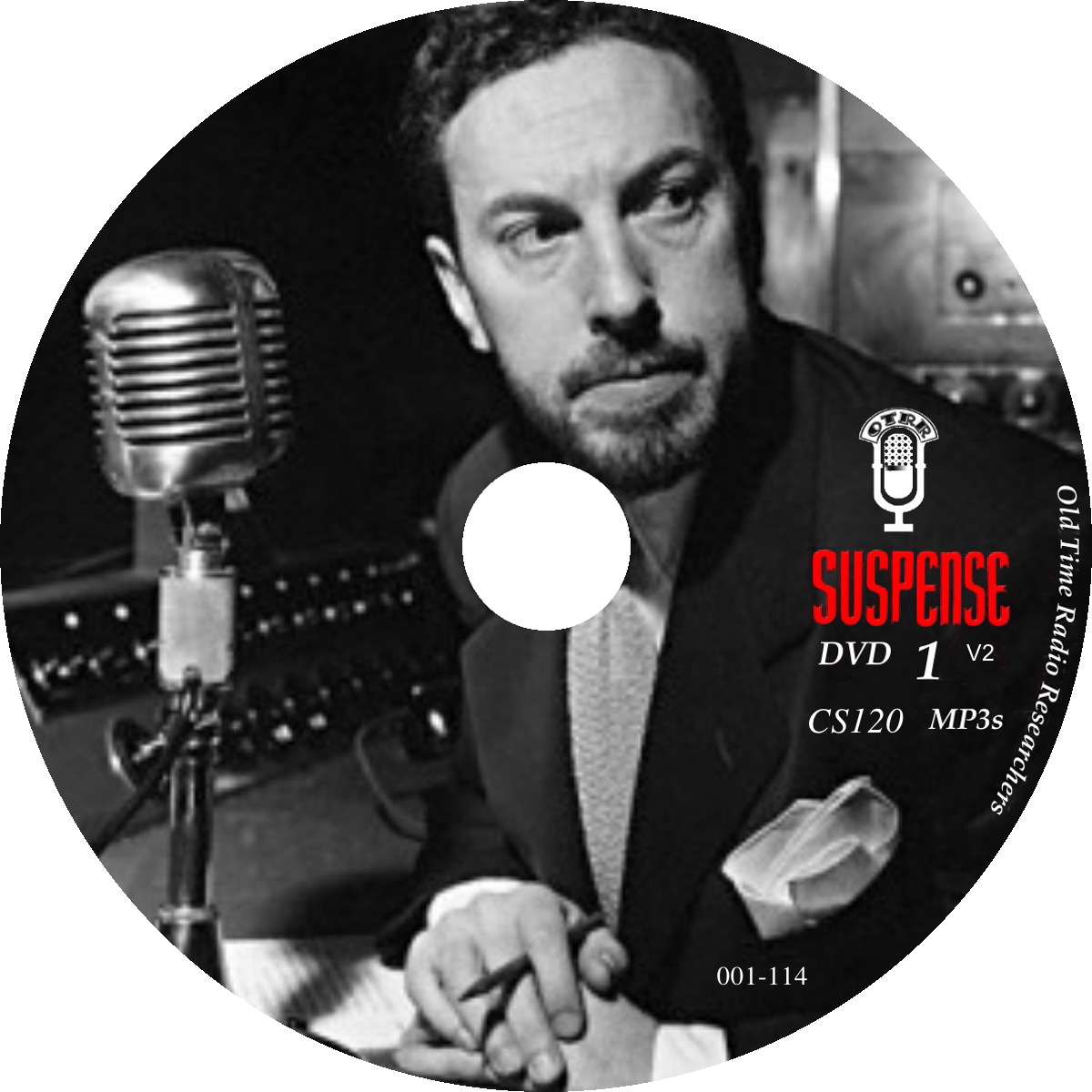 The individual episodes have been broken down into several different pages:

This is one of these pages. Click on one of the above for a different OTRR Suspense - Single Episodes page.


On September 30, 1962 a major milestone in radio drama came to an end with the final episode of the long running series, SUSPENSE. Ironically, the episode was titled "Devil Stone" and was the last dramatic radio play from a series that had its roots in the golden age of radio.

What began as a "new series frankly dedicated to your horrification and entertainment" took on a life of its own mostly due to the talents of some outstanding producers and adaptations and original stories from the cream of mystery writers of the time. The golden age of radio was truly the golden age of SUSPENSE as show after show broadcast outstanding plays which were "calculated to intrigue...stir [the] nerves."

It was the series' first producer, William Spier, who set the framework of rules that was to stay with the show for most of its run. Mr. Spier determined that the series should deal with life-and-death situations established near the beginning of each play and then through the use of Bernard_Herrmann's musical coloring and the writer's characterizations slowly tighten the knot of SUSPENSE. Many of the early stories were written by the mystery writer John Dickson Carr. Others were by such fine writers as Lucille Fletcher, whose SUSPENSE play, "Sorry, Wrong Number" (listen/download) was turned into a major motion picture; Robert Arthur, Robert L. Richards, Morton Fine, and David Friedkin. The series also drew from the mystery writers of the day as well as the horror writers of literature; writers such as Edgar Allan Poe, H. P. Lovecraft, Cornell Woolrich, Dorothy L. Sayers, and H. G. Wells.

Many of the stories produced by Mr. Spier are now classics of the genre. Listen to the likes of "The House in Cypress Canyon" (listen/downoad) as a young couple encounters something in the closet of their new home, something horrible and dangerous; or "The Hitch-Hiker" (listen/download) in which a man driving cross-country seems to be haunted by an ominous figure, who keeps reappearing trying to get a ride. But what foreboding does the hitchhiker hold for the driver?

Another rule William Spier established was to make the series a place to hear the talents of Hollywood's famous actors. There rarely was a famous actor who did not appear on the series at some time. Jimmy Stewart, Cary Grant, Humphrey Bogart, Lucille Ball, Olivia de Havilland and many others all made at least one appearance. The series had a generous budget from its network, CBS.

In 1948 the series had become popular enough that it was decided to broadcast for a complete hour, instead of the former thirty minutes. The actor Robert Montgomery was brought in to introduce the plays, replacing the "Man in Black" character and occasionally star in them. This format lasted only six months most probably due to the realization that the show worked best within a thirty minute framework.

It was at this time that William Spier left and over the years others came to produce the shows, each setting his own unique mark. Anton M. Leader, who came from producing another horror radio program, Murder at Midnight (OTRR Murder at Midnight), added some lighter SUSPENSE stories which focused more on the central characters. Jimmy Stewart appeared in an excellent story about a paralysed war veteran who thinks he has found the man who imprisoned and tortured him. Fibber McGee and Molly appeared in a tale about a killer on the loose in "Backseat Driver" (listen/download).

Probably the biggest change in SUSPENSE came under the producing eye of Elliott Lewis. Lewis brought in comic actors to play serious roles. Actors such as Jack Benny, Red Skelton and Ozzie Nelson. He also was not afraid to experiment using the series slot for classic "murder" stories such as "Othello".

The series continued to produce high-quality drama, though there were many repeats as well as borrowing of scripts from other radio shows. While a number of film actors continued to star occasionally, many of the stars were from radio and television since radio as a dramatic art form was beginning to lose its popularity and budgets were tightened.

The show was on the air for a little over twenty years beginning in January, 1942 and was rarely pre-empted. There were 947 performances. Nearly all (approximately 895) are available to collectors. When SUSPENSE left the air, radio was never to see the likes of such a series again. Now the great medium of radio where imagination can run free has been reduced to the occasional brilliant drama airing sporadically in some corner of the world. SUSPENSE was a golden moment in a golden age. A moment when the thrill of the nightime led the listener along the path of intrigue, horror and dangerous adventure.

Permission for use granted by Jim Widner

Replaced files on this page from the Version 2 Release.

- Old Time Radio Researchers Group
Reviewer: SaraBellePalsy - favoritefavoritefavoritefavoritefavorite - January 4, 2017
Subject: 1942 - 2017
Yep, it's now 75 years since this show began, and you still can't help but marvel at the audio quality of most of these shows. These episodes show some growing pains, like almost any new series trying to "find itself." (Who wants to watch a Seinfeld rerun of one of the first several episodes?) However, there's still some keepers in this list. In addition to "The Hitch-hiker," another good listen is "The Cave of Ali Baba." There's a pretty good WWII era adventure story in "Menace in wax." "100 in the dark" is good, as are"The Burning Court," and "The Bride vanishes." I never tire of Suspense, and listen to an episode (or several) every night.
Reviewer: NoSpillBlood - favoritefavoritefavoritefavoritefavorite - November 12, 2015
Subject: EXCEPT for the fact that this season contains The Hitchhiker
...which kind of changes anything bad you could say about these early Suspense episodes. --One of radio maven Lucille Fletcher's masterworks.

There's not one season of this series that can be totally counted out.
Reviewer: kristinmak - favoritefavorite - August 26, 2015
Subject: Audio good, content - miserable
The writer(s) for this year: awful. The stories in here are really just sickening, not even interesting or suspenseful, they are pornographic (not sexually but in the literal sense of the word) bad writing, really so bad I was shocked they released such really bad stories in this era. For instance, one opener is describing some guy who kills kittens or rabbits or something, gross. There is no morality or moral to the story. The first year of "Suspense" and last year were really bad! If you are just listening to it for the first time, start later like the late '50s but not this year's season.